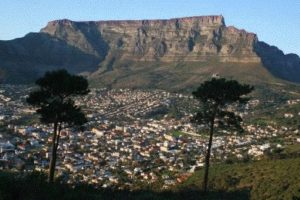 The Light of Antares and the City of Light at Cape Town. In the era before humans, Table Mountain was the meeting place of the Intergalactic Council for Earth’s evolution. This is the true cradle of humanity’s physical form, because this is the place from which the Syrians, Pleiadians, and other star people started the genetic transformations that created the first human beings. They oversaw human evolution until humans gained their full free will. Today the mountain still anchors a City of Light like a giant crystalline sphere that floats above the mountain. It is a beautiful place that still holds its connection to this ancient history.

Ulla and I have come here to help anchor a Temple of Antares once again in a City of Light. The temple we anchored today is itself a sphere within the sphere of the city. This one holds the most intense light we have experienced so far, and it connects through many dimensions like a diamond shimmering with inter-dimensional consciousness. It is a fantastic light, even though today is not the end point. The activations of the Cities of Light across the Earth is not complete, and this Temple of Antares waits for the moment when the grid connecting all of the Cities of Light is fully activated. Until then, the Arcturians have a special role is keeping these temples secure. A great transformation of the Earth is being prepared in countless places like this by high dimensional beings and by humans. When will we be ready?